Maybe I should rephrase that: As a souvenir from her mission she got a small ice box full of ‘seafood’. We have seen that before, people traveling by plane from the seaside to the city, checking in those ice boxes full of fish and what not.

She had no idea what exactly was in there, but noticed that ‘something in there moves’ … and when we finally opened in at home, we found those 2 fellows: 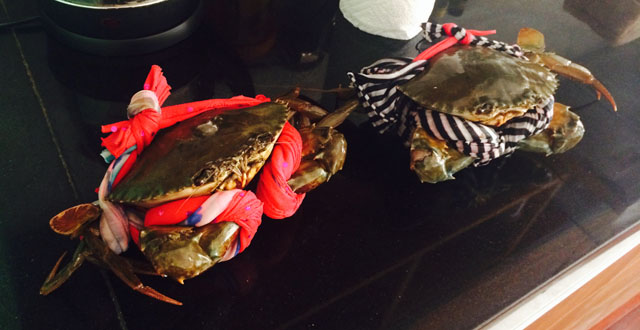 I have never had the pleasure of dealing with live crabs in the kitchen (and on such short notice), so, I turned online for some advice. Here is a full recap of a discussion on the local FB foodie group. Many interesting points raised like ‘killing before cooking, yes or no’ and ideas of preparation.

When Julius came home and I tried to recruit him as my sous-chef, he was not condoning the idea of killing those fascinating creatures ..

In the end I found a very easy solution: I gave the 2 crabs to our landlord neighbors as a present

And (I did not count on that) an hour later, we got one of those crabs, nicely cooked, in return. 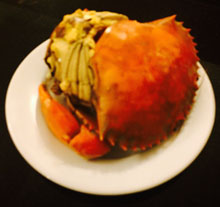 But still, Julius suggested to ‘make this an offering to the Gods’ instead of eating it.

After watching some youtube instructions I figured out how to get to the meat, it was very tasty, but very little and a lot of work!